The Bizarre Legal Theory That Could Upend Federal Elections

Last week, amidst the dumpster fire that was the last SCOTUS term, we got the news that it will hear a case that centers on the Independent State Legislature (“ISL”) theory.

Let’s talk about what ISL is, why it’s setting off alarms, and what you can do here in Ohio.

TLDR: The ISL in its most extreme form could allow Republican-dominated state legislatures to ignore their state’s popular vote and award their state’s presidential electors to Trump. That would allow them to legally steal the 2024 election. The ISL could also make Congressional gerrymanders unreviewable by state supreme courts, and eliminate/constrain citizen-led gerrymandering reforms for federal elections. (Like we said. It’s bad. And it’s why our Blue Ohio community is so focused on supporting Democrats running for Ohio state legislature.)

(Click here if that makes you say to yourself
“Yikes! I think it’s time that I join Blue Ohio!”)

What is the Independent State Legislature theory?

The ISL is grounded in an ideologically-based and myopic view of the Elections Clause in the US Constitution, which says “The Times, Places and Manner of holding Elections for Senators and Representatives, shall be prescribed in each State by the Legislature thereof; but the Congress may at any time by Law make or alter such Regulations, except as to the Places of chusing Senators.”

(Yes, they really used that spelling of “chusing”. Quaint, right?)

According to ISL theorists, that clause means state legislatures alone have complete and total power over the federal elections in their states – without interference from governors, secretaries of state, the state’s supreme court, or even the state’s constitution.

Basically, with respect to federal elections, the most extreme version of the doctrine neuters any state actors other than the state legislature.

At the same time, it increases the power of federal judges, who are given new power to interpret state constitutional limits and state election statutes. As you’d expect, that’s usually done by state judges.

Why Does It Matter If State Legislatures Have This Unilateral Power Over Elections?

First, let’s talk about the potential implications for presidential elections.

How Could the ISL Impact Presidential Elections?

According to the most extreme ISL theorists, state legislatures alone control elections and how they select presidential electors, and could therefore award their electors to whomever they choose – regardless of the popular vote in their state. That’s not an interpretation that’s supported by scholars, or even serious conservatives, but is the one that was pushed by John Eastman in his attempts to overturn the 2020 election.

And of course that’s the bit that’s (rightly) garnering a ton of attention, because the doctrine could allow Republicans to steal the 2024 election in broad daylight, with full legal authority as blessed by the U.S. Supreme Court.

As explained by former 4th Circuit Court of Appeals judge and conservative icon Michael J. Luttig, the ISL theory is one of the pathways Republicans tried in their 2020 effort to get state legislatures to change their state electors.

And according to Luttig, now they’re laying that groundwork again – and the only way to keep Trump (and Republicans) from stealing the 2024 election is “if the Supreme Court rejects the independent state legislature doctrine” and lets state courts enforce their own state rules on elections and electors.

Election attorney Mark Elias seems to agree, saying “The way I view it, Republicans tried to subvert the 2020 election, but were clumsy and they are now learning from that where the pressure points and vulnerabilities are in our election systems, and refining their tactics.”

There are serious consequences in non-presidential elections, too.

How Could the ISL Impact Non-Presidential Elections?

The case that’s brought the theory before the Court is an appeal from the (Democratic) North Carolina Supreme Court, which ruled the (Republican) North Carolina state legislature’s severe partisan gerrymanders of Congressional districts are unconstitutional under their state constitution.

The state legislature appealed, using the ISL theory to say state courts have no role when it comes to federal election rules created by state legislatures – including partisan gerrymanders of Congressional districts.

And so, if the Supreme Court blesses even this “lesser” form of ISL, it would preclude state courts from restraining gerrymandering (at least as to Congressional districts). That has huge implications for independent redistricting commissions and anti-gerrymandering efforts.

It also has massive practical effects, because it could mean different standards are required for state and federal elections.

To use a technical term, it would be a hot mess.

What Have Justices Said So Far About ISL? Is There Any Hope?

At least four justices have signaled at least an interest in the theory (Clarence Thomas, Samuel Alito, Neil Gorsuch and Brett Kavanaugh).

But there’s reason to believe Chief Justice Roberts isn’t all-in on it. In 2019, in Rucho v. Common Cause, Roberts explicitly said that “provisions in state statutes and state constitutions can provide standards and guidance for state courts to apply” to redistricting.”

He further explained the role of courts in saying:

“Our conclusion does not condone excessive partisan gerrymandering. Nor does our conclusion condemn complaints about districting to echo into a void. The States, for example, are actively addressing the issue on a number of fronts. In 2015, the Supreme Court of Florida struck down that State’s congressional districting plan as a violation of the Fair Districts Amendment to the Florida Constitution.”

So in Rucho, Roberts points with approval to state courts being able to strike down a state legislature’s Congressional redistricting plan as proof that there is a check on partisan gerrymanders, even in federal elections.

The other conservative Justices on the Court at the time – Alito, Gorsuch, Kavanaugh and Thomas – signed on to that opinion.

Taking a different position now would be a big change. (Not that a big change in direction is a major impediment to this Court these days.)

Of course, Rucho was decided in 2019 – and the makeup of the Court is different, now.

Honestly, nobody knows how Justice Barrett falls on the issue.

Since SCOTUS announced they’d take the case, legal scholars have come out of the woodwork with articles and research showing just how wrong-headed the ISL theory is. Whether any of that will matter to this Court is an open question.

The Upshot: What You Can Do

All this to say, it’s not clear to anyone how the justices will come down on the Independent State Legislature theory.

What is clear, however, is how important this Court has made state legislatures.

Whether it’s your right to make your own healthcare decisions, managing the climate crisis, or addressing the gun violence epidemic – the battle will be waged in the states.

That’s why supporting state legislative races is so important. And it’s what we are 100% focused on here at Blue Ohio.

We’re a community that’s crowdsourcing support to ensure every Democratic nominee that’s running for Ohio state legislature has the resources they need to fight for all of us – including you.

That’s a huge change: In 2020, 19 Ohio state legislative districts went completely uncontested – and in another 27 the Democrat on the ballot didn’t have resources to compete.

Through Blue Ohio, we’re chipping in to make sure that doesn’t happen again.

These uncontested and unsupported districts are where the most extreme and radical Republicans are based. We have to hold them accountable. We have to make them answer for their failed, radical, extreme policies.

And that means supporting the people running against them.

Blue Ohio doesn’t take a cut of your donation, which is split among the nominees. We operate based on tips, so you can rest assured your funds are going to the nominees that need them most.

If you’re worried about where Ohio is going and are ready to fight back, join the community that’s taking the fight to every single district.

P.S. Plus, every month we have a Blue Ohio member virtual lunch, where we get together and hear from special guests. If you’re a donor at $10/month or more, you’re automatically invited. This month’s meeting is on July 15, and we’ll be welcoming two Ohio Supreme Court Justice nominees and Ohio State Rep candidate Dr. Anita Somani. We’d love to see you then! 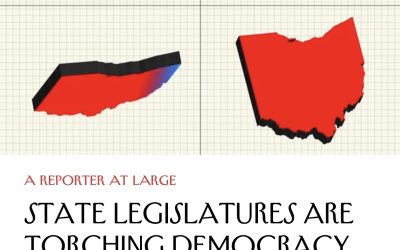 Even in moderate places like Ohio, gerrymandering has let unchecked Republicans pass extremist laws that could never make it through Congress. By Jane Mayer August 6, 2022 Ohio’s voters are moderate, but its legislature is to the right of South Carolina’s....

END_OF_DOCUMENT_TOKEN_TO_BE_REPLACED 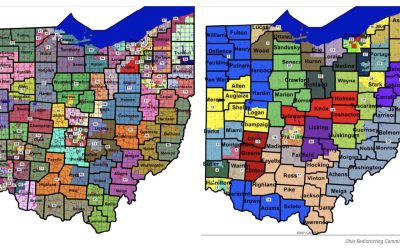 Another Unconstitutional Map The Ohio Supreme Court just ruled that the maps submitted by the Redistricting Committee violate our state Constitution, because they are unconstitutional gerrymanders. Again. This is the sixth time that the Court has stricken down the...

END_OF_DOCUMENT_TOKEN_TO_BE_REPLACED 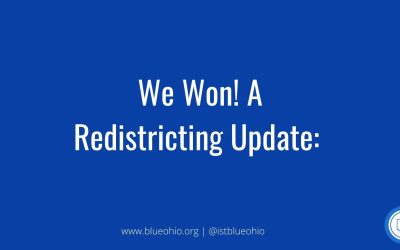 We knew you'd want to hear some good news, and we're glad to share it. tldr; On Friday (which was a busy day for a whole host of reasons) the Ohio Supreme Court ruled in favor of four Democratic candidates for state legislature, who Secretary of State Frank LaRose...